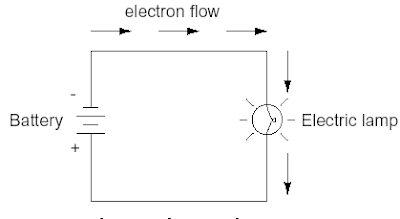 It is the property of material to oppose the flow of electric current through it. The opposition of to flow of current is due to the presence of large no of atom or molecules of the material through which electrons flow. During the movement of electrons collide with these atoms or molecules. Unit of resistance is ohm (Ω).The most common schematic symbol for a resistor is a zigzag line:

Where ρ (rho) is a constant of material, called specific resistance or resistivity
For a conductor of length 1m and cross-sectional area 1 m2, R = ρ.

Where α is a constant called temperature coefficient of resistance, and is numerically equal to ‘the change in resistance of a unit resistance for unit rise in temperature’

From Eq. above we get:

The circuit component which has the properties of resistance is called resistor. In other words the resistor is the manufactured version of resistance.

Carbon resistor: They are made of finely ground particles of carbon mixed with ceramic material and enclosed in an insulating material. They are compact, easy to manufacture and cheap. They are widely used in electronic devices and circuits e.g. radio, TV, telephone set etc.

Film resistors: Thin layer of resistive material (carbon composition) is deposited on the insulating base to make a film resistor. Film resistors are very compact and accurate. They are widely used in integrated circuits (ICs).

Variable resistor (Potentiometer):  They are made of thin layer of carbon composition deposited on an insulating base. A third contact called slider is provided to vary the resistance between fixed terminal and slider terminals. They may be sliding type (as equalizer in cassette player) or rotary type (as volume controller of radio).

Inductance is the property of a coil which opposes any change in current flowing through the coil. It is denoted by L and its unit is Henry (H).

Inductor:
It is a two terminal circuit element which has the capacity to store energy in the form of magnetic field. Inductors are made by winding the conductor around a core. The core may be magnetic or non-magnetic material. The value of inductance of the inductor depends upon the geometry of the coil and the permeability μ of the core.

Capacitance is the property of a system of insulated conductors in which energy can be stored in the form of electric charge. It is denoted by C and unit of capacitance is Farad (F).

Farad
One Farad is the capacitance of a capacitor that can store 1 Coulomb of charge when applied potential difference to capacitor is 1 Volt.

Paper Capacitor: Two rolls of tin, aluminum or copper foil conductors are separated by a tissue paper are rolled into a compact cylindrical form to make a paper capacitor. The capacitance of these capacitors range from 500pF to 1000pF.They can be used for both ac and dc circuit.

Mica Capacitor: In these capacitors thin mica sheets are staked between two aluminum or tin foils, to provide required capacitance. The entire unit is generally molded in the bakelite case. They are used for grater accuracy and high voltage. Their capacitance ranges from 5pF to 500pF.
Ceramic Capacitor: It consists of disc of ceramic material (usually barium titanate, or talk or hydrous silicate), whose parallel surface are coated with metallic silver. These capacitors are very versatile, since they possess very low power factor. There capacitance range from 3pF to 2μF. They can be used for both ac and dc circuit.
Electrolytic Capacitors: They employ an electrolyte as a dielectric. They consist of an aluminum cylinder containing an electrolyte like ammonium borate which also acts as cathode. An aluminum anode is suspended inside the electrolyte. When current is passed through two electrodes a thin film of aluminum oxide (Al2O3) is formed on the surface of the aluminum cathode. The oxide film acts as a dielectric. These capacitors are mainly used where very high value of capacitance is required.